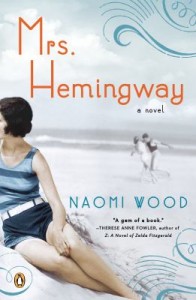 Many stories have been told about the passionate, and sometimes manic, Ernest Hemingway.  Biographies have also been written about each of his four wives.  Now there is a book that skillfully blends all of these accounts into one poignant tale. Making her U.S. debut, British author Naomi Wood has written a well–researched novel about Hemingway’s spouses, pulling material from personal letters and archives. Each wife tells her own story, effortlessly moving the reader through almost 40 years of Hemingway’s life.  Hadley is a tender mother and doting wife. Beautiful Pauline is admired by the writer’s artist friends. Martha, a journalist, found wartime reporting more exhilarating than marriage. Mary, also a journalist, struggles through her husband’s depression, alcoholism, and suicide. Each woman’s story flows seamlessly into the next, providing a detailed account of Hemingway’s erratic nature.