The following are pictures of the Canton Square. The square has had an interesting and at times controversial history. The “Square,” also known as Jones Park, was established in the spring of 1830. One of the first controversies arose concerning the “Liberty Pole,” which was a wooden pole placed in the center of the square. According to Edward R. Lewis, Jr., in his work, Reflections of Canton in a Pharmacist’s Show Globe, the Liberty Pole was first used to display the American flag on July 4th, 1857. While disagreements occurred related to its repair and upkeep, it remained standing until 1884 when it toppled in a storm.

One of the major controversies involved the addition of hitching posts around the square. Businesses were concerned it would detract from business. Public health concerns also surfaced concerning the livestock roaming freely. At that time you did not fence in your livestock–you fenced in your garden to keep livestock away.

We found several different pictures of the Canton Square and based on historical information have tried to estimate a date they were taken. It is interesting to note the types of transportation used as well as the electrical/lighting systems and road construction. Each of these photos links to a larger image. 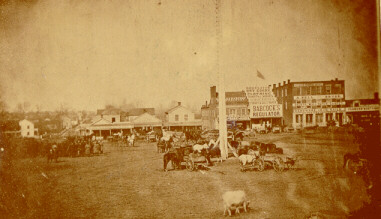 This photograph is believed to have been taken around 1865. The Liberty Pole is present.

This photograph courtesy of the Canton City Museum is believed to have been taken around 1900-1908. 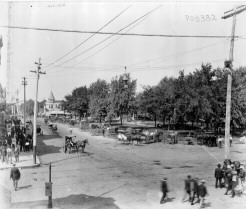 This panoramic view is taken from a color postcard circa 1900-1910.

Public library service for Canton, Illinois was initiated in 1892 thanks to the beneficence of William Parlin, Sr., inventor and founder of the P&O Works, a plow factory that was later sold to International Harvester. Parlin bequeathed $8,000 for the construction of the Parlin Public Library, as it was initially called, in his will, under the stipulation that the City of Canton would contribute a sum of $5,000. Two short-lived controversies ensued, which involved: 1.) The level of tax mill to be levied; and 2.) An initial stipulation from the three Parlin heirs (William H. Parlin, Jr., Clara Parlin and Alice (Parlin) Ingersoll). According the Canton Daily Register, the initial stipulation stated “in the event of the city failing to keep said building in good order and repair, and use same for public library and art building, then in that event the property is to revert back to us to the extent of said bequest.” Once these two issues were clarified, the donation was accepted by the city, city taxes were levied to raise $5,000 and the library was completed in 1894.

Josephine Resor served as Canton’s first Library Director for 34 years, from 1894 through 1928.

The Parlin Public Library, with land acquisition, ended up costing around $24,000, with over half of the funding coming from the original bequest, plus additional donations from the Parlin family. “The heating apparatus, gas and electric lighting, the finishing and furnishing of the building, the shelves and fixtures of the stack room, all library supplies, the 2,800 books which the library contains…were donated by the Parlin family,” according to a June 1896 library board report . After the library opened, William H. Parlin Jr. continued to provide funding for library materials, buying most, if not all, of the library materials every year, plus art prints and sculptures. He served as Vice-President of the library board from 1896 until 1918.

In 1918, the Parlin heirs created a permanent endowment for the library in the amount of $30,000 in Liberty Bonds. This was the same year that William Parlin Jr. transferred all of his shares in the Parlin & Orendorff Company and the Canton Gas & Electric Company to his nephews, William P. Ingersoll and Charles D. Ingersoll and his niece, Winnifred Ingersoll. Nephew William assumed Presidency of the P & O Works and nephew Charles assumed Presidency of the power company. Soon thereafter, in 1920, William Parlin, Jr. passed away. The Ingersoll siblings were the children of William Parlin, Jr.’s sister Alice and brother-in-law Charles E. Ingersoll. They were the grandchildren of William Parlin, Sr. and Caroline (Orendorff) Parlin.

In 1929, another Parlin heir, Clara Parlin, sister of William Jr. and Alice, bequeathed $20,000 to the library in a trust fund. The YWCA, Salvation Army and other non-profit agencies also received bequests, but the bulk of her $1.3 million estate went to her two nephews, William and Charles Ingersoll, and her niece, Winnifred Ingersoll. Years later, of course, these same three siblings also inherited the bulk of their mother’s estate. In summary, William, Charles and Winnifred Ingersoll inherited the entire substantial fortune amassed by their grandfather and enhanced by their uncle.

Upon his death in 1941, Charles D. Ingersoll bequeathed a trust to the Parlin Public Library, which is shared with Graham Hospital and the Canton School District. In establishing this trust, Charles D. Ingersoll was following the tradition of his grandfather (William Parlin Sr.), his uncle (William Parlin Jr.) and his aunt (Clara Parlin), for community philanthropy, with a particular interest in the library. After the death of Charles Ingersoll’s wife, Elizabeth, in 1956, the three beneficiaries named above received the full amount of the Ingersoll estate through annual trust distributions, since Charles and Elizabeth had no children.

Dorotha Nelson served as Library Director during the 1958 building project. She served as Director for 32 years, from 1932 through 1964.

The current library was built under the direction of library board President William P. Ingersoll, brother of Charles, who served on the library board from 1918 until his death in 1973 and as President of the Board from 1932 to 1973. William P. Ingersoll succeeded his uncle, William Parlin, Jr., on the library board, much as he succeeded him as President of the P & O Works. Mrs. Charles D. ( Elizabeth) Ingersoll was involved in the early planning stages of the new library as well, serving on the board from 1951 until her death in 1955. William Ingersoll helped manage the library during his long 42-year reign as Board President, presiding over the Board’s annual meetings and managing the building’s physical plant, budget and capital improvements, among other things. During this time, the library board held only one meeting each year.

When William P. Ingersoll died in 1973, he left all his assets to various non-profit organizations in the Canton area, since he had no wife or children. The William P. Ingersoll Trust helps fund numerous Canton area organizations, including, but not limited to, the park district, airport, YMCA, YWCA, Red Cross, Salvation Army, Boy Scouts and seven churches. The Charles and William Ingersoll Trusts continue to help support many Canton-area non-profit organizations, meaning that the bulk of the Parlin fortune remains in the Canton community where it was first earned.

The library now features a spacious and attractive children’s room; a modern music and movies display area; multiple adult seating areas, including a quiet reading room with fireplace; and a Program Room that can accommodate 50 to 60 people.

One of the unique additions to the newest library addition is seven stained glass panels that were obtained from the old Parlin library after the City of Canton ceased using it as the City Building. These windows were obtained in 2004 through the efforts of James Elson, Library Board President, working with Mayor Jerry Bohler. Mr. Elson paid for the complete restoration of these stained glass panels and they serve as a beautiful border to the quiet reading room.

The reading room also features an antique Ansonia school house clock, which was donated in memory of Edd Lowe by his family. Mr. Lowe was the head contractor for the 2004 addition. He died in an industrial accident at the library construction site in December 2003.

Search our catalog for books, movies and more.