MOVIE: From Here to Eternity 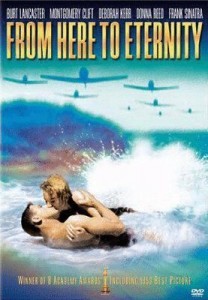 The second film in our Sinatra film festival is 1953’s FROM HERE TO ETERNITY.  At an Army barracks in Hawaii in the days preceding the attack on Pearl Harbor, lone-wolf soldier and boxing champion “Prew” Prewitt (Montgomery Clift) refuses to box, preferring to play the bugle instead. Pvt. Angelo Maggio (Sinatra) is his only friend and supporter.  Hard-hearted Capt. Holmes (Philip Ober) subjects Prew to a grueling series of punishments while, unknown to Holmes, the gruff but fair Sgt. Warden (Burt Lancaster) engages in a clandestine affair with the captain’s mistreated wife (Deborah Kerr).  FROM HERE TO ETERNITY won the Academy Award for Best Picture, while also earning Sinatra an Oscar for Best Supporting Actor.