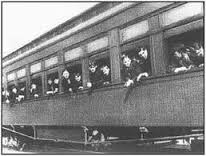 Come join us on Tuesday, August 18, 2015, from 6:30-8:00 p.m. to hear Harold Rose speak about Orphan Trains.  The Rev. Charles Loring Brace founded the Children’s Aid Society of New York in 1853.  Through the Society the Orphan Train concept began as a movement in the late 1850s to transport homeless and orphaned children from the eastern United States to foster homes in the west.  The program continued into the late 1920s.  Mr. Rose will also share the experiences of his grandfather, who rode an orphan train.