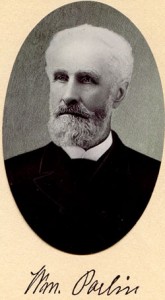 During the first hundred years in Illinois history one can see many developments in the land and its people. The rugged prairie land was a challenge for those settling and farming Illinois. These conditions made it the perfect time for a man like William Parlin.

William Parlin was born in Acton, Massachusetts, on January 21, 1817. He came from a long line of New England descendants reaching back to the Massachusetts Bay colonists. While he had learned the art of blacksmithing in Massachusetts, he yearned to move westward and arrived in Canton, Illinois, in the summer of 1840. He married Caroline Orendorff on January 7, 1845. They had four children: Artemus F., William H., Clara E., and Alice C. (Mrs. Charles E. Ingersoll).

He started various blacksmith businesses and eventually began to manufacture plows in 1847. He later joined forces with his brother-in-law, William J. Orendorff, in the 1850s. Mr. Parlin was the inventor and designer of the operation while Mr. Orendorff was the business manager. By 1880 they had incorporated the P & O Plow company in Illinois. Their sons, William H. Parlin and Ulysses G. Orendorff, successfully continued the business, which was eventually purchased by International Harvester in 1919.

Mr. Parlin created simple mechanical devices to ease the burden of the farmer in the fields. He has been attributed with developments in stalk cutters, disc plows, and double-plows or listers. He utilized steel for the entire plow, which in the past had had wooden moldings. We have included a few pictures from the P & O Plow catalog of 1909 in this site. His contributions were formally acknowledged with his induction into the Illinois Farmer’s Hall of Fame in 1917.

William Parlin died on June 25, 1891. He not only made life easier for the early Illinois farmers, but he and his descendants left a legacy to their community with endowments that support the local park district, schools, library, hospital, and various churches. 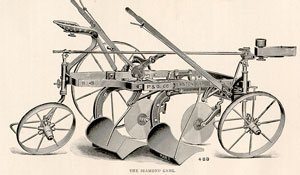 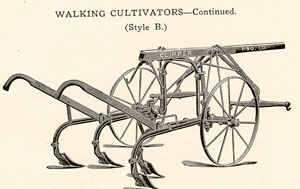 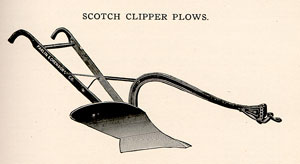 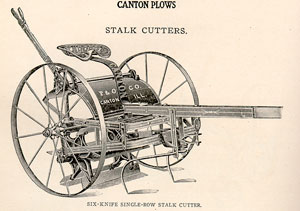 Lewis, Edward R. Reflections of Canton in a Pharmacist’s Globe. 1967.

Poster for the Clipper Plow

Search our catalog for books, movies and more.